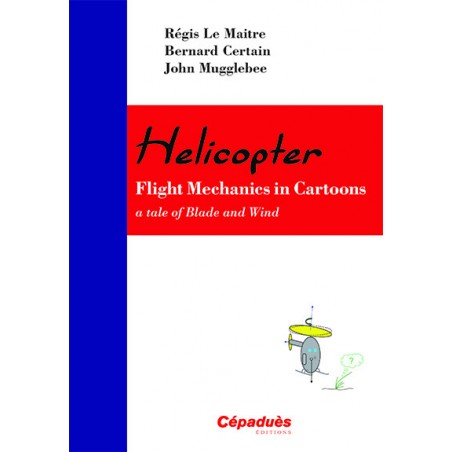 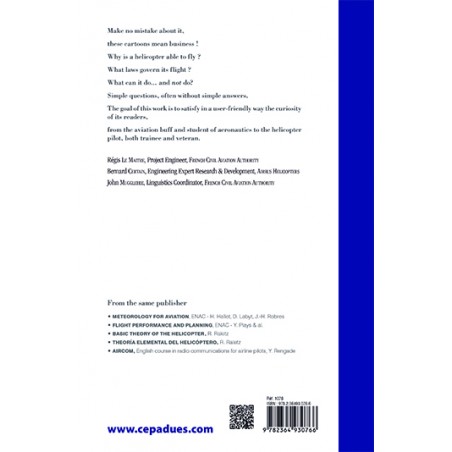 Helicopter Flight Mechanics in Cartoons - a tale of Blade and Wind

Auteurs :
Collection :
Make no mistake about it, these cartoons mean business !
Why is a helicopter able to fly ?
What laws govern its flight ? What can it do... and not do?

Make no mistake about it,
these cartoons mean business !
Why is a helicopter able to fly ?
What laws govern its flight ?
What can it do... and not do?
Simple questions, often without simple answers.
The goal of this work is to satisfy in a user-friendly way the curiosity of its readers,
from the aviation buff and student of aeronautics to the helicopter pilot, both trainee and veteran.
Preface
One of the most amazing things with helicopters is that we still don't fully know how and why they can fly. This slightly exaggerated statement, especially coming from the head of engineering of a helicopter manufacturer, can anyway illustrate a simple fact : helicopter flight is a complex matter !
I am therefore more than delighted to introduce a book that contradicts this statement, by bringing such a complex explanation to an understandable level, by the use of sketches, drawings and other cartoon items.
When I got the request from Jean-Pierre Marson and saw the performance realised by Regis Le Maitre, Bernard Certain and John Mugglebee, I could not resist, both as an aerospace engineer and a old fan of cartoon, to share this admiration for such a book mixing technical facts, pedagogy and a slice of fun.
I wish such books could be part of our engineer's course, as I wish it would have been available when I was a student and had to endure fascinating but quite tedious lectures on helicopter flight mechanics and associated disciplines.
Even as an ex- military pilot, I do think that this book can bring a lot for a learning pilot as a complement to the quite heavy but mandatory books imposed by our regulations.
It will lead you from the very basic principles of a rotor and the main equilibrium of hover and forward flight, to the trickier phases of the flight implying safety considerations like vortex ring state or autorotation, via a very comprehensive part on the helicopter performance which, after safety, remains the main challenge for any design.
As a conclusion, I let you read this book that mixes the passion for aeronautics, for helicopters in particular, for teaching and learning, and for graphic art.
Enjoy reading as I did, you can only love it !
Jean-Brice Dumont
Airbus Helicopters
Extrait 1076 Helicopter Flight Mechanics In Cartoons A Tale Of Blade And Wind

The Function Shapes the Organ,

The Price of Lift

Rotor Wind and the Blade Element

The Lateral Dissymmetry of Relative Win8

The Articulated Rotor in Hover

The Articulated Rotor and the Lateral Dissymmetry of Relative Wind

Cyclic Pitch Variation and the Lateral Dissymmetry of Relative Wind

The Art of Flying

The Lateral Dissymmetry of Relative Wind

The Lateral Dissymmetry of Relative Wind and Cyclic Action

The Dissymmetry of Induced Velocity

The Positive Effect of Translation

The Negative Effect of Translation

A Question of Power

The Domain of the possible

Hover Out of Ground Effect (HOGE)

Preventing a Vortex from Happening

Recovery from a Vortex

The Ergonomics of Yaw Control

The Tail Rotor in Hover

The Tail Rotor in Forward Flight

The Positions of the Rudder Pedals 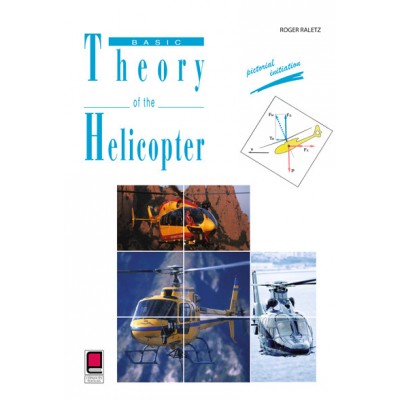 Basic theory of the helicopter